The Bonfire of the Statuaries 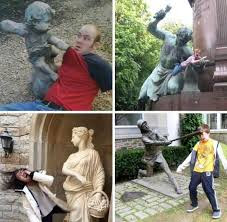 "We have destroyed 80% of the statues. There is only a small amount left and we will destroy that soon." -Mullah Omar, Taliban Supreme Leader (deceased)

- The Bonfire of the Statuaries (HT: WSJ Potomac Watch Podcast) continues and the IUPPP&PVTTTOT stands firm. There will be no peace until there is justice.

The International Union of Perpetually Protesting Protestors and Perpetual Victims of This, That, and The Other Thing.

Unfortunately, as to what sort of justice, actually implementable, that will restore peace remains ill-defined. I confess that I sometimes wonder if this is tactical, a never-ending jobs program for members of the IUPPP...etc.

However, virtue flags are flying, politicians are pandering, businesses not destroyed (by brick, fire, or plague) are donating — and Congress has threatened to pass yet another law.

Unfortunately or fortunately (one never knows...), Congress being Congress, and this being an election year, it's not going well.


The following Random Randomness should be read aloud with your best Columbia School of Broadcasting voice.

In other news that you should have heard about but likely didn't, Antonio Gwynn, an 18-year-old African-American gentleperson from Buffalo, New York, spent ten hours cleaning up the trash and broken glass on (George?) Baily Avenue in Buffalo left behind by people protesting police brutality.

Mr. Gwynn's 15 minutes, the result of a local TV news feature, landed him a car, a year's worth of car insurance, and a free ride at a local college courtesy of some other gentlepersons.

Clarence, could you please send Frank Capra down long enough to make one more movie?


- If you're killed by a heavy, rotted out tree branch that lands on your head while you're communing with nature via a stroll in a sylvan setting is that "death by natural causes"?

Once the plague began ravaging the realm I became one of those people I used to sneer at, a compulsive obituary reader. I was surprised to find that most people die from natural causes or apparently just drop dead.

For the record, being of more or less sound mind I declare and affirm that even if I die peacefully in my sleep it is my wish that my obituary states that the cause of my death is under investigation. If my loved ones love me when asked they will reply, "I'm not at liberty to say," look troubled, and change the subject.


- As I've recently written, much to my surprise I, who thrived as a hippie with a job for 13 years, seem to be turning into some sort of conservative. In my ongoing attempt to define exactly what sort of conservative I am I discovered that I'm a fusionist.

Well, Dana, according to Wikipedia, "...fusionism is the philosophical and political combination...of traditionalist and social conservatism with political and economic right-libertarianism."

[What's up with all the italicizing?]

In the Wikipedia entry, those words are all links to other entries. As you know it's my editorial policy to use as few links as possible, with an emphasis on self-serving links.

Yup. Links that bring up something from my website.

Anyways, the bad news is that according to the entry, the fusion has faltered and the formerly fraternal factions are now fighting fractious factions.

Well, as you know, I'm running for king via a write-in campaign and it's occurred to me I need a name for my party. Branding and marketing, I'm told, are everything these days. So, I give you (insert fanfare, here):

The Live and Let Live party!

BYOI (bring your own ideology) but let's start acting like adults trying to find a way to make their marriage work for the sake of everyone in the family.


- I hate my cable company.

Over the years I've shelled out a significant amount of money to  Roadrunner/Time Warner Cable/Charter Spectrum/Spectrum or whatever their name is this week.

If I owned a company that had a gummit granted monopoly on cable services in a given area where people paid to watch content that was one-third commercials,

and I charged extra for content that didn't,
and I could force people to pay for content they never watched,
and if I claimed my content was available on-demand, when it often wasn't,

If I were running a popular "premium" (costs extra) series and knew people had been waiting a week to see the latest episode and for some reason it wasn't available this week,

I'd post a simple e-note of explanation. I might even say sorry about that. I'd whistle all the way to the bank knowing I was rich and a nice guy/girl/they.