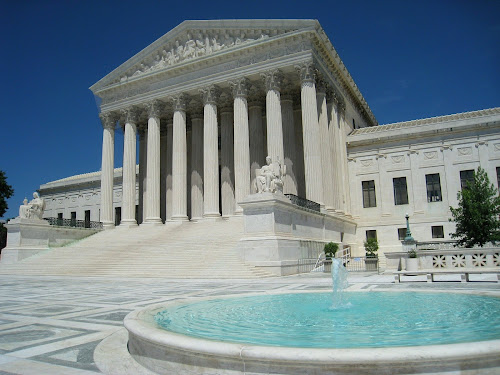 "I never want to be in the business of predicting what the U.S.Supreme Court will do." -Neal Katyal

Please Note: I wrote the original version of this column prior to the tragic death of George Floyd. It fell behind the shelf I stack my columns on and I just found it while doing some late Spring cleaning.

While "columns shelf" is just a charming metaphor, I did write it over a month ago and promptly forgot about it. I've decided to tweak it and publish it now because it's about something conservatives, liberals, and progressives should be able to agree on.

Having come across the word cert in the course of my relentless pursuit of current events and having only a vague notion as to its meaning, I went a-googlin'. Cert is an abbreviation for the word certiorari, a Latin legal term that means to be made certain in English.

One of the reasons I'm a current events junkie is because Sister Mary McGillicuddy taught me that paying attention to what's going on in a complicated world enables you to function optimally.

For example, I accidentally discovered that Certs:

[The second quote is wildly inaccurate, you added...]

I discovered that Certs, a 62-year-old product was quietly deleted last year, most likely (I was unable to confirm) because they contained partially hydrogenated cottonseed oil, a health hazard, which is now banned by the FDA.

The bad news is that Crisco, from 1911 to 2004, was made primarily of partially hydrogenated cottonseed oil. Therefore, if your childhood, like mine, included no shortage of Crisco, well, good luck buddy.

[For the love of God! What has any of this to do with the Supremes?]

Well, nothing really, Dana. In fact, the title of this missive is clever clickbait (or at least one hopes). This column is about the other Supremes, as in Supreme Court judges.

The point of the preceding was to illustrate that Sister Mary was doubly correct. Not only does paying attention enable you to function optimally it can lead to additional and useful information.

Now, while the Purple Press and the Orange One were busy proving that so-called real life is high school with money — in the midst of a global pandemic — your friendly neighborhood crank was busy trying to get occasional peaks behind the curtain.

While you were (hopefully) social distancing America's sweetheart, and possibly the anti-Christ, Alyssia Milano was showing off her crocheted face mask which triggered a frothing flock of twitterers. She then revealed it cleverly concealed a charcoal filter, which triggered a secondary Twitter triggering...

The Supreme Court of the United States of America turned down the legal equivalent of a whole roll of certs asking them to reconsider what something called Sovereign Immunity is doing to the republic.

Long story short (I'm in the middle of a Charmed binge):

The certs that I'm referring to are the certs pilled up in the Supreme Court asking that they reconsider a 1984 ruling that gives "qualified immunity" to gummit officials. You can't sue cops, for example, in civil courts for taking a shyte on your life unless they violate "clearly established law."

[You're making up words again, and, it sounds like the Supremes got this one right so why...]

Actually, its an alt-spelled version of a real Irish word that's the Irish version of a crude English word. In my semi-humble opinion, it almost renders it poetical.

The problem is with a legal phrase, clearly established law. Lower courts, I know not why, have interpreted this to mean that unless there's a specific law against, say a couple of cops turning a police dog loose on a suspect kneeling on the ground with his/her/their hands up you can't sue him/her/them.

[That would never happen.]

It happened. The cops were granted qualified immunity because there's no specific law against what they did. This and 12 other cert petitions asked the Supremes to take up the problem. They said no.

They don't have to say why they accept some cases and refuse others.

Congress could fix it, today, with legislation.

Update, 6/14/20: From CBS News: "Senator Tim Scott, a Republican from South Carolina, said Sunday that limiting qualified immunity for police officers in future legislation that aims to address officer misconduct would be a 'poison pill' for GOP lawmakers and effectively sink the measure."