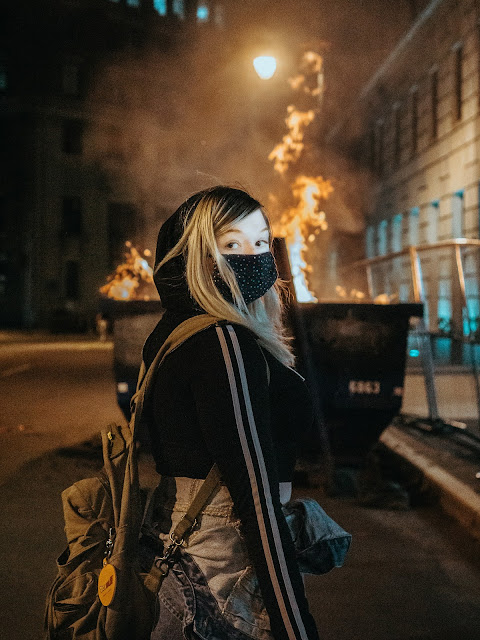 -Photo by Amber Kipp on Unsplash-

"Conservatives are people who love something actual and want to retain it."
-Roger Scruton

Until recently, if anyone at a cocktail party had asked me about my political and/or philosophical leanings I would have described myself as a wild-eyed libertarian and free marketeer with a bleeding heart and conservative impulses.

[You've never been to a cocktail party.]

Well, the game's not over yet, Dana. I wonder if people even still have cocktail parties? I'll be right back...

Clearly, I need to get out more. Cocktail parties are indeed still a thing.

I even found a posting on a website, The Trend Spotter, titled "COCKTAIL ATTIRE FOR WOMEN (THE DRESS CODE DEFINED)" with a picture of five women in need of a bacon cheeseburger (or two).

They look like five variations on a theme: tall, heavily made-up, long-haired, Adderall addled 10-year-old boys with a suggestion of breasts posing on a rooftop in NYC.

Sir Roger Scruton, little known outside of certain small circles, is a recently deceased polymath, gentleperson, and one of my intellectual heroes.

In his (and my) defense, he was born into a working-class family and his key to the ivory tower was confiscated early on for the crime of being a true, old school intellectual conservative more interested in conserving hard-learned truths than tenure or trust funds.

Dr. Scrtton wrote more than 50 books, including four novels, lots of magazine and newspaper articles, and a couple of operas in his free time. He also qualified to be a barrister (lawyer) but didn't practice.

And during the 70s and 80s, he helped set up underground universities, gave lectures and smuggled banned texts in Poland, Hungary, and Czechoslovakia which at the time, my younger and/or lesser informed gentlereaders, were enslaved by the Russians.

And, for the record, my younger and/or lesser informed gentlereaders, the current dick-tater of Russia, the Pooteen, spent the 70s and 80s working for the KGB. The KGB was to the U.S.S.R. as the Gestapo was to Adolf Hitler's Germany.

[And, for the record, what does any of this have to do with you becoming a conservative?]

If I should ever actually attend a cocktail party and if anyone asks me about my philosophical/spiritual/political leanings...

And if I'm drunk enough to answer given that the wrong leanings in the midst of the Intersectional Inquisition might get ya canceled or killed...

I would reply that I'm a sorta/kinda conservative with a bleeding heart and a free marketeer with libertarian impulses.

Sadly, no. But I'm still in the process of figuring out how to explain myself so perhaps there's hope. The definitions of what a conservative is by many on the left and the right don't apply to me

But the only thing I'd like to discuss at the moment is how I got here...

Which is the same way Roger Scruton did.

In May of 1968, I was 14 years old and trying to figure out how to join the sexual revolution.

Roger Scruton, 24, an apolitical chap at the time, was living and studying in Paris. A bunch of college students, under the spell of many of the same postmodern thinkers now revered by the woker than thou, tried to start a political revolution.

According to Wikipedia, it was to protest traditional institutions, capitalism, consumerism, American imperialism, and etecterism. They began by shutting down their schools and then took to the streets and began breaking things and setting things on fire.

Before it was over, the zany French being the zany French, everybody went on strike but then began turning on each other. Once this particular national Spring break ended everyone felt better and things returned to normal

The young Mr. Scruton, a student living among students at the time, decided on the spot that whatever these well-fed, pampered children of the middle class were for he was for the opposite, and a conservative was born.

In May of 2020, as best I can tell, a thug was murdered by another thug wearing a police uniform. Protestors, exercising one of their fundamental American rights, took to the streets.

However, some of them began breaking things and setting things on fire... and trampling on the rights of their fellow citizens. The hard work and dreams of many entrepreneurs of all races were damaged or destroyed along with a lot of jobs.

I'm for conserving the opposite of whatever the hell that is.
Poppa loves you,
Have an OK day

Email ThisBlogThis!Share to TwitterShare to FacebookShare to Pinterest
Labels: conservatism