Just Who IS This Guy?

"There's no royalty in America, so people deify actors." -Joseph Gordon Levitt
"I think of myself as a young prince from a long line of royalty." -Wesley Snipes

I wonder if the United Kingdom will still have a royal family by the time yinz guys are Sexy Seasoned Citizens like me? Considering Prince Chucky's spawn have spawned a passel of potential potentates, and the lucrative nature of the family business, I'm guessing it will.

Being a cynical old fart who suffers from chronic skepticism brought on by stumbling upon one too many unfortunate incidents while repeatedly circling the proverbial block, I'm aware there's much wisdom to be found in the simple three-word phrase follow the money.

Speaking of spawn, it was pictures of Prince Chucky -- sporting an impressive looking assortment of medals pinned to his flawless bespoke suits last month when he and the Donald visited France for the D-day commemorations -- that spawned this letter.

I went a-googling to discover how he managed to accumulate all that martial-themed bling because as far as I knew, although he had been in both the army and navy, he had never been in any danger of stopping a bullet fired in anger.

Of course, there's that rumor that Brigadier Andy, Vanilla Camilla's husband when she and Chucky got caught cheating on their respective spouses, got loaded and tried to shoot Chucky at (on?) a fox hunt. It's probably not true since I just made it up.

Anyways, turns out that all that hardware is the royal equivalent of good conduct and marksmanship medals. His mum gave him a few and he's got a cool uniform he can showcase them with 'cause he's in charge of the Welsh Guards.

[If you follow the cool uniform link above make sure you scroll down to see his Royal Chuckyness wearing one of those two-foot tall bearskin caps (yes they're made of real bearskin and fur) that make the big-haired rockers of the 80s look pathetic by comparison.]

From what I was able to discover...

[Sorry, I just can't help myself. If any of my readers hang out/are acquainted with the prince who would be king, whose bottom so far has only graced the same sort of throne we commoners use, please tell him that wearing all those Cracker Jack box medals at D-Day commemorations was, well, a little ballsy in my semi-humble opinion.] 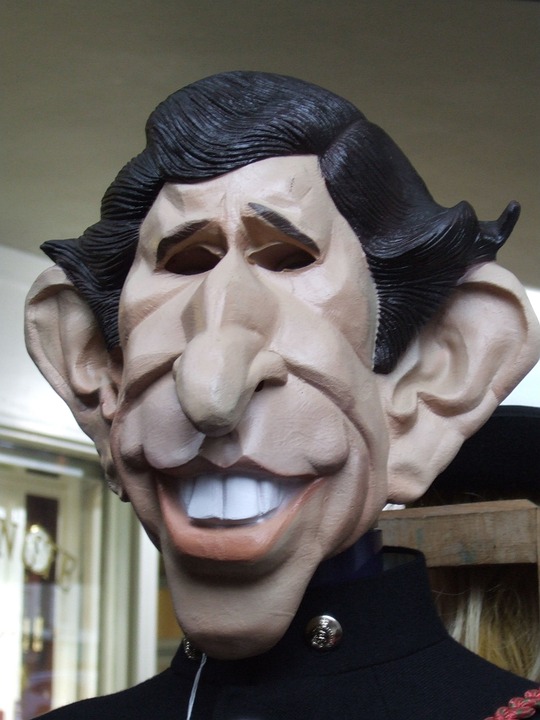 
From what I was able to discover from several minutes of intense googling, a majority of British subjects seem to support maintaining these world-class amusement park characters. Well, there is the fact that unlike say, Disney world/land/whatever employees, these guys show up for work already trained.

I figured it was the fact that a lot of the peasants also work in/are beneficiaries of the imperial anachronism industry.

Someone's got to make/import/sell all the officially licensed geegaws, tchotchkes, and commemorative plates and it takes a lot of royal bum wipers and toothpick polishers to properly maintain a currently expanding royal family 24x7x365.

The monarchy of the UK has been around 1,000 years more or less which is more than enough time to fill the entire realm with On This Spot _______ plaques, castles, and down on their luck aristocrats. And nowadays you can be knighted for being a rock star.

Imagine how many jobs and how much money is generated by tourism and related industries.


I went looking for numbers and the consensus is that the imperial anachronism industry turns a healthy profit. Of course, estimates of just how much are all over the map as you would expect. It depends on who is doing the counting and exactly what is being counted.

Monarchy in the UK: the royal family's uncertain future

Makes it sound as though the royals should be updating their resumes and considering technical training classes. "I say, Mumsy, there seems to be a bunch of little people with pitchforks and torches gathering in front of the castle."

Purple Journalism alert
If you read the article, a mild hit piece chock full of if/then speculations masquerading as journalism, most of the content matches up with the headline but you'll discover two things.  First, it quotes an estimate that the monarchy yearly brings in 1.8 billion (with a b) Pounds to the realm but the tab for the extended family is only 300 to 350 million (with an m) Pounds. That's a nice markup.

What I find more interesting is that it hints at the overall popularity of the royals but neglects to mention that 7 out of 10 Britons call themselves monarchists. As to why, well, I found all sorts of reasons. However, my favorite one is mentioned in this article.

"Logic is not the most important factor. We are happy to accept eccentricity and quirkiness because they reflect an important part of our national character."

Like us, our cousins on the other side of the pond have also resisted the imposition of the metric system so I say God Save the Queen! Poppa loves you.

P.S. Since writing this I came across the following quote. Considering the fact that globalization has its downsides, it makes perfect sense to me.

"The monarchy is the filter of Britain's collective memory through which its people forms its sense of identity." -David P. Goldman


©2019 Mark Mehlmauer As long as you agree to supply my name and URL (Creative Commons license at the top and bottom of my website) you may republish this anywhere that you please. Light editing that doesn't alter the content is acceptable. You don't have to include any of the folderol before the greeting or after the closing except for the title.