I Come Out Of the Closet

Just Who IS This Guy?

"Sexuality is a private matter; some believe that broadcasting it destroys the very things that make it sacred." -Lance Loud


BIG BUT
I've also mentioned previously, and repeatedly, that for all the kids to share the playground without stepping on each other's toes, rules, written and unwritten, are required.

Good manners require that you don't go out of your way to make other H. sapiens uncomfortable.

You'd like them to understand that you're not a threat to their kids, hell, to anybody for that matter. Just another Citizen of the Republic trying to get through your day and taking solace from whatever gets you through the night.


As to not going out of your way to make people uncomfortable, there are a lot of fine lines to be drawn in a free country.

When I was about ten years old I bought a pair of cheap sunglasses at one of the 5 & 10 cent stores on the Sou'side-a-Pittsburgh (with an h) for the princely sum of 79¢.

This was the mid-sixties and granny-style wire-rim sunglasses with brightly colored lenses in square frames were cool for a minute or two because various rock stars sported them. Roger McGuinn of the Byrds was famous for his.

[Fellow geezers and geezerettes, I've just been handed a news flash by the editor of the who'd a thunk it desk -- Mr. McGuinn is still alive, still making music, and he and his wife are Republican, evangelical Christians.]

I donned my newly acquired treasure and headed up Carson street to the apartment above a butcher shop that me and mine lived in at the time. I proudly noted that I was generating looks from the grups I passed that ranged from amused to dirty and various permutations in between.

This was an unexpected, serendipitous surprise. I was just trying to be cool, I didn't realize I would alarm the grups. I was elated. In my defense, it was the sixties. Did I mention I was ten? While I was only ten I was already caught up in the whole rock 'n' roll rebellion thing -- however innocently and peripherally.

[Had I any way of seeing what some of the things this rebellion would eventually lead to, and the intellect to grasp the ramifications, I would've spent my 79¢ on homemade french fries fried in lard (Julia Child would understand) and washed down with a root beer at Woolworths.]


Now, contrast my boring old man story with say, oh Idunno, something you might see at an LGBTQ+ pride parade. 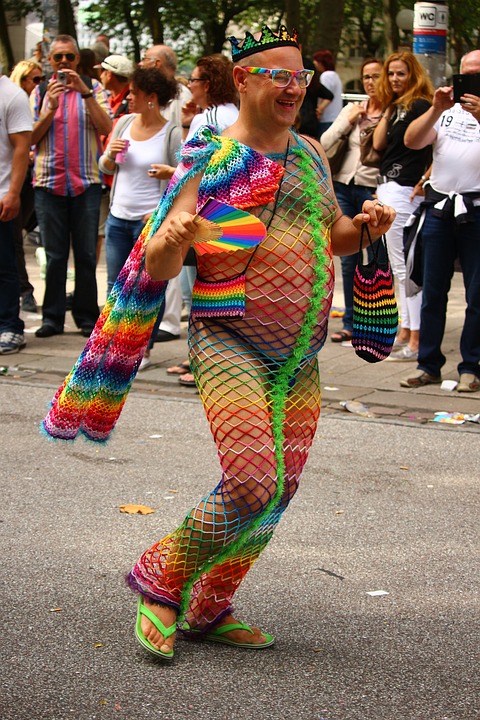 Image by Rihaij from Pixabay

Since I'm heterosexual, biologically male and a Caucasian -- but inexplicably and randomly identify as an African-American lesbian woman (who looks remarkably like Halle Berry) named Coco -- I to often feel like a victim of the Normies and live at a very busy intersection.


Incidentally, as to the closet I've decided to vacate, I confess that (with the possible exception of certain pseudo sports) I don't like sports. I don't even care for most games. Trivial Pursuit is ok, but like all games, particularly cards, it can quickly turn into slow torture. I...

Oh, hi Dana. Pseudo sports are sports that, although they may, and often are played seriously, they can, and often are, played while eating and/or intoxicated. Bowling and softball come immediately to mind.

[Cornhole and horseshoes would seem to be better choices, who plays either of those games seriously?]

Follow the links. The members of the American Cornhole League and the National Horseshoe Pitchers Association would beg to differ.

[Fine, but pointing out that you don't like sports has nothing to do with coming out of the closet.]

Having spent a great deal of time during my kid and callowyute stages pretending to like sports, and even playing them to fit in when I'd rather have stayed in my closet reading a good book or even watching TV,

As a grup, having endured literally thousands of conversations about _______ (insert game all the dudes were talking about the next day here) without running screaming from the room because I had to work with these guys, or not wishing to be Mr. Buzzkill on a good road trip,

I must beg to differ.

One, two, three, four... Yikes! this calls for an emergency wrap up.


Deliberately going out of your way to make other H. sapiens uncomfortable, or reveling in/demanding approval of your highly unconventional (or even absurdly conventional) lifestyle makes you the problem.

Inadvertently making other H. sapiens uncomfortable just by being you is their problem.

If you'd like to be left alone, perhaps even respected, maybe even loved, learn to leave alone. Poppa loves you.

©2019 Mark Mehlmauer As long as you agree to supply my name and URL (Creative Commons license at the top and bottom of my website) you may republish this anywhere that you please. Light editing that doesn't alter the content is acceptable. You don't have to include any of the folderol before the greeting or after the closing except for the title.

Email ThisBlogThis!Share to TwitterShare to FacebookShare to Pinterest
Labels: LGBTQ+