Vote For the Narcissistic A-hole ⸺ It's Important 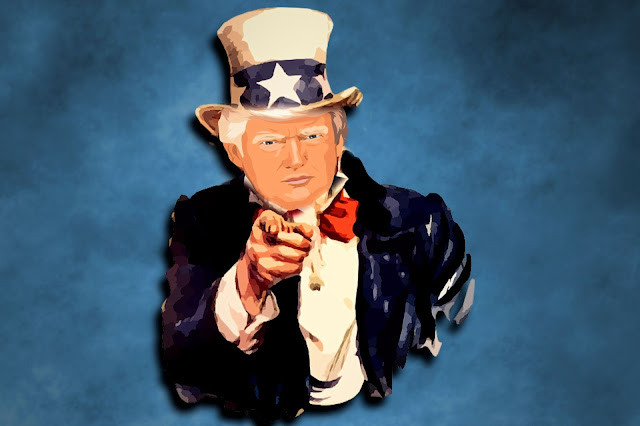 Image by kalhh from Pixabay

"Corruption is a cancer: a cancer that eats away at a citizen's faith in democracy..." -Joe Biden

In my semi-humble opinion, Donald J. Trump is a narcissistic arsehole.

However, since I've been unable to secure a commitment from a dissatisfied, high ranking general or two to provide me with enough troops to execute a soft coup, I'm voting for the Donald. In fact, I already did.

We all have to grow up eventually.

To the best of my knowledge, there are no high profile seemingly rational, well respected public figures (or even actors) of the right calling for dusting off the guillotines if the Orange one is not reelected.

"When this nightmare is over, we need a Truth and Reconciliation Commission. It would erase Trump’s lies, comfort those who have been harmed by his hatefulness, and name every official, politician, executive, and media mogul whose greed and cowardice enabled this catastrophe."
Tweet! Tweet!
Nor, to the best of my knowledge, are there any high profile seemingly rational, well respected public figures (or even actors) of the right calling for dusting off the guillotines if the Orange one is reelected.
Former Secretary of State John Kerry has stated that another electoral victory by the Donald could provoke a revolution in the United States.
Dana executes a not half bad imitation of a chicken clucking and says:
[I think you'll be okay given that your writing career is not quite the stuff of legend. Given that you could vote libertarian like you did last time, why did you vote for the Donald if you think he's a narcissistic a-hole?]
That was a protest vote. The Hilliam are even more corrupt than Uncle Joe and Hunter the Gatherer, or at least better at it. Also, I thought the Donald was as surprised by his nomination as I was (and as surprised again when he was elected president).
[Wait a sec', now that I think about it you haven't mentioned anything about why you have such a low opinion of the Donald.]
Where to begin? Trophy wives, the fact that his primary business focus for the last several years involved selling the sizzle, not the actual steak, "Grab 'em by the pussy," the... listen, the absurd hairdo and the orange-tinted skin speak volumes.
The primary reason I don't like him was the long line of small contractors that stepped up to say that this "big guy" was infamous for stiffing the little guys when the bill came due. Because he could.
Being a former small — make that tiny — business owner, I took that personally.
However...
Prior to the plague, we enjoyed three solid years of economic growth despite the previous administration (which, as you may remember, included uncle Joe) telling us for eight solid years that the party was over.
Everybody out of the pool. From now on it's tepid economic growth and "leading from behind." Jimmy Carter Malaise had returned.
But then the Donald, while distracting the Purple Press with his absurd tweets, cut taxes and regulations, freed the frackers (= cleaner air + lower energy prices), stood up to China, reduced illegal immigration, and reignited the economy.
Oh, and with the help of Jared Kushner, his thirty-something son-in-law, passed a prison reform bill and accomplished more for peace in the Middle East than the above mentioned John Kerry could even dream of.
[Well, maybe, but since the plague hit he's...]
We're not going there, Dana, it's still half time (HT: Scott Adams). The legion of "experts" constantly contradicting each other while regularly changing their tunes and a Purple Press that prefers sensationalism to clarity has left me dazed and confused.
My fingers are crossed and I've noticed Crafty Kamala and Uncle Joe have proposed nothing new.
Look, I don't like what the Republican party has devolved into any more than I like what the Democratic party has devolved into. But Uncle Joe served as VP for eight years while the economy sputtered and race relations deteriorated in spite of the fact we had a black president.
Biden is still claiming that he got into the race to save us from Trump the evil racist in spite of the fact that the "fine people hoax" he never gets tired of spreading was/is, indeed, a hoax.
Biden doesn't seem to have a problem with Swamp's way of doing things as long as it's his kid that's hip-deep in the putrid water while Uncle Joe maintains semi-plausible deniability from his basement.
Finally, given that there's a better than average chance Crafty Kamala will wind up behind the desk in the oval office I'm sticking with the devil I know.
Poppa loves you,
Have an OK day

P.S. If you've never heard the name (Lt.) Tony Bobilinski you should Google it immediately. You will easily confirm that Uncle Joe (a.k.a. the big guy) is as corrupt as the Purple Press Corps that guards the walls of the Swamp.