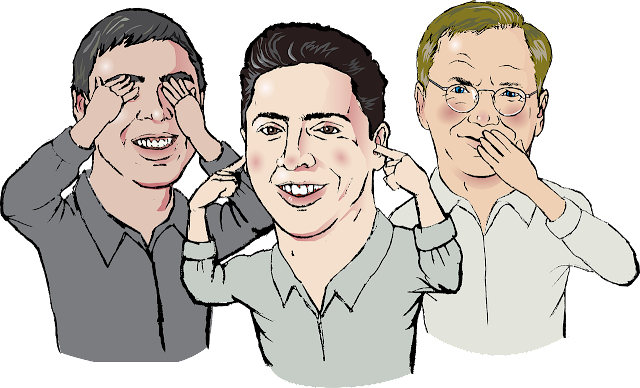 Larry and Sergey and Eric — Oh My!
Image by OpenClipart-Vectors from Pixabay

Erratically Appearing Hallucinatory Guest Star: Dana — A Gentlerreader
"When I showed up, I thought this was the stupidest rule ever, because there's no book about evil except maybe, you know, the Bible or something." -Eric Schmidt, former chairman/CEO of the Goog — now a (technically) married international playboy — commenting on the Goog's now-defunct rule, Don't be evil
Dear (eventual) Grandstickies and Great-Grandstickies (and Gentlereaders),
Recently, noticing a marked increase in advertising when I'm watching YouTube I decided to complain — not that I expected this would accomplish anything beyond making me feel better for a half a minute or so.

[Are you aware of the fact that the H. sapiens that provide YouTubes content get a cut of the advertising revenue and/or a cut from the subscription fee?]

I will not only stipulate to all of the above I will admit that I could write an entire column devoted to everything I love about YouTube.

After all, it's not only possible to watch cute kitty videos, it's also possible to pull up talks by and interviews of scientists and public intellectuals in every field, as well as the music of musical giants in every genre, living and dead.

The Goog's contempt for "users."

"There are only two industries that call their customers 'users': illegal drugs and software." -Edward Tufte

Now, just for fun, imagine some old geezer watching/listening to Coffee With Scott Adams which is usually about an hour-long with a new episode available every day.

Our hero is in the midst of a series of physical therapist prescribed exercises to relieve his spinal stenosis, as well as some other exercises, while listening to Mr. Adam's observations on life in these United States (HT: Reader's Digest) at a playback speed of 1.25 or even 1.5 as Mr. Adam's tends to ramble.

Imagine our hero's reaction when he's lying on his back and for whatever algorithmically determined reason, the adverts are coming more frequently and are longer than usual and he doesn't want to keep getting up to click through them.

[Imagine that our cowardly "hero" keeps postponing back surgery because of all the people he knows that back surgery did nothing for, or even made worse, and who's too cheap to pay for ad-free YouTube.]

Imagine our hero, who worked full-time mostly at physically demanding jobs for 45 years or so and is scraping by on an embarrassingly humble fixed income decides that for the very first time he's going to complain to YouTube.

YouTube, if you're unaware, is owned by (insert ominous music here) — the Goog.

It can't be done.

[Wait-wait-wait. I know for a fact you went looking and there are all sorts of ways to complain about...]

[You know... Given your, um, advancing age, and the fact that you have little patience for what amounts to having to take a class to accomplish...]

What should be simple to accomplish...

I repeat, what  should  be  simple  to  accomplish.

Particularly in light of the fact that I'm old enough to know there's no such thing as a free lunch, that I'm the product, and that the Goog gets a little richer and more powerful every day by peering over my shoulder and selling my, nay everyone's data, to the highest bidder.

[Are you done? Do you feel better yet?]

I do feel a little better, yes, but not having hit my word limit yet I'm not quite done.

On an unrelated note...

America, the Harris/Biden campaign is refusing to answer an existentially important question. If elected, and if they can persuade our corrupt and dysfunctional Congress to go along, are they prepared to destroy the Republic?

[Destroy the Republic? All they're saying is that it's not fair, due to historical serendipitousness, that we might soon have a Supreme Court top-heavy with sticks in the mud that insist on interpreting the constitution literally instead of creatively so...]

So that if Krafty Kamala/Uncle Joe is in charge and the Dems get control of the Senate they can appoint as many like-minded Supremes with lifetime appointments as needed to create a mini House of Lords to save us from ourselves.

[Well, there's nothing in that moldy old constitution that says they can't so...]

So the hell with that pesky checks and balances thing, the end justifies the means, right? What's the worst that could happen?

Free bonus content! Quotations from Chairman Eric. Sample: "I actually think most people don't want Google to answer their questions. They want Google to tell them what they should be doing next."
Share this column or give me a thumb (up or in my eye) below. If my work pleases you you can buy me some cheap coffee with your debit/credit card.