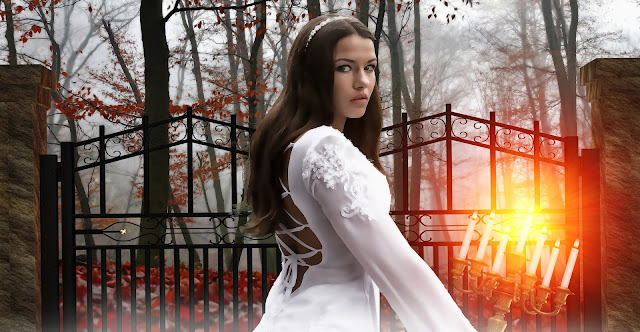 Image by Enrique Meseguer from Pixabay
This is a weekly column consisting of letters to my perspicacious progeny. I write letters to my grandkids and my great-grandkids — the Stickies — to advise them and haunt them after they become grups or I'm deleted.
Warning: This column is rated SSC — Sexy Seasoned Citizens — Perusal by kids, callowyutes, and/or grups may result in a debilitating intersectional triggering
About

Erratically Appearing Hallucinatory Guest Star: Dana — A Gentlerreader
"From ghoulies and ghosties
And long-leggedy beasties
And things that go bump in the night.
Good Lord, deliver us!" -Depends on who you ask...
Dear (eventual) Grandstickies and Great-Grandstickies (and Gentlereaders),
We're having a perfect fall here in my little corner of Flyoverland.

Whatever combination of weather conditions that are necessary to produce optimal leaf coloring have apparently occurred and my twice-daily brisk walks around the neighborhood to avoid having to engage in more serious forms of exercise are in technicolor.

[You're fortunate enough to live in a neighborhood chockablock with stately old trees and you don't know why they...]

I did, Dana, but I can't remember.

[You're writing this on a computer, why don't you just open a new tab and look it up?]

Because I wouldn't remember why for more than a minute or two because I'm... moderately old. The good news is that getting old provides clarity as far as what details are worth going out of one's way to remember. Given that details are literally infinite and our memories are not this is quite useful.

This is quite useful because being as present and wide open as possible to whatever I'm experiencing here and now is much more important than sweating the details... or even making sure I take a picture with my phone.

[I guess... It must be a geezer/geezerette/geezem thing.]

Actually, it's a sexy senior citizen thing.
While admittedly I'd be unlikely to go to a Halloween party even if we weren't still battling the Wuhan Flu, or march in Hooterville's legendary Halloween parade even if it hadn't been canceled, I've had a great idea for a costume that would be quite easy to put together.

I'd rent or borrow (can you rent a regular suit?) whatever sort of suit is currently favored by the lobbyists that infest the Swamp that included a bright red "power tie" of the sort favored by the Donald.

What makes a power tie a power tie anyway? I've never understood the concept. Hang on a sec', I'll be right back...

Okay, according to Balani Custom Clothiers, "It's called the power tie for a reason, and by wearing a red tie you are implying you mean business. Just like Tiger Woods wears a red shirt to convey dominance, the red tie is a reaffirmation of strength, authority, and dominance within the professional world."
Good to know. Hmm... I wonder if the name Tiger Woods is a carefully considered aspect of Mr. Woods shtick. Tiger of the woods as in golf clubs and/or tiger from the woods as in, well, a tiger from the woods.
[Ahem...]
Anyways, I'd also wear a large, tacky tie tack fashioned to look like a dollar sign and prominently display a large, gold-trimmed crack pipe in my vest pocket. I'd carry a large green shopping bag with the following printed in gold letters on both sides.
Hunter (Biden) the Gatherer
"You ain't seen nothin' yet"
Cash preferred
[You should be ashamed for spreading Russian dissinformation. Besides, other than smoking a little crack, nothing he did was technically (that we know of, at least not yet) illegal and he never told his dad... unless he did. And even if he did his dad probably doesn't remember.]
Two points of information for my dear gentlereaders. A tip o' the hat to Scott Adams for Hunter (Biden) Gatherer.
Also, if you're saying to yourself, "I don't get it," you're either indifferent to current politics, are not entirely unwisely trying to be indifferent to current politics, or are living in an efficiency apartment in the information silo on the left side of the barn.
I mentioned in a column about Halloween 2019 that Halloween lights, which didn't exist when I was a kid, had popped up here and there. I'm delighted to report that there are more of 'em this year. I think it's an anti-plague and Purple Press perpetually promoted political polarization countermeasure.
Not only that, it appears that the number of households that have decorated for Halloween, which has been in a slump, is up this year. For whatever reason, there appears to be a record amount of jack-o'-lanterns, real ones, on display.
The Stickies went all out this year, unfortunately/fortunately, they went all out early. The pumpkins are rotting, the faux cobwebgraphy is looking somewhat bedraggled, and the scarecrow with a Frankenstein-like face has a pronounced posture problem that makes him look like he's overdosing on fentanyl.
[Unfortunately/fortunately?]
Well, when the light is just right, the deteriorated display looks quite menacing.
Poppa loves you,
Have an OK day

Cranky don't tweet.
It’s called the power tie for a reason, and by wearing a red tie you are implying that you mean business.  Just like Tiger Woods wears a red shirt to convey dominance, the red tie is a reaffirmation of strength, authority dominance within the professional world.
Posted by Marcus Mehlmar (a.k.a. Mark Mehlmauer) at 3:33:00 AM