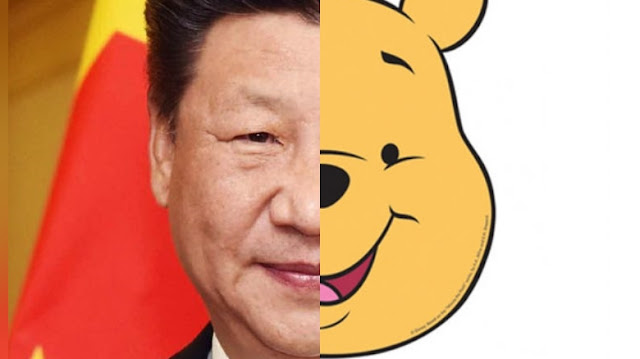 Erratically Appearing Hallucinatory Guest Star: Dana — A Gentlerreader
"A man can’t be blamed for not knowing, but for not asking." -Uyghur proverb

Uyghur lives matter. So do the lives of Hong Kongers, Tibetans, members of traditional religions, and members of spiritual movements like Falun Gong.

...And so do the lives of the Taiwanese, nervously keeping an eye on the Chinese mainland in case one of the current Red Emperor's war games turns out to be the real thing.

No shortage of celebrities and hooge, globe-spanning corporate entities — Lebron James, Nike, and the NBA spring immediately to mind for some reason — who have/are donating billions in cash and pledging fealty to Black Live Matter don't have much to say about what appears to be a systematic Uighur genocide.

Or any of the other depredations of Emperor Poo.

“Under conditions that strongly suggest forced labor, Uighurs are working in factories that are in the supply chains of at least 83 well-known global brands in the technology, clothing and automotive sectors, including Apple, BMW, Gap, Huawei, Nike, Samsung, Sony and Volkswagen...”
The quote is from a report by the Australian Strategic Policy Institute titled Uyghurs for Sale.

Speaking of Black Lives Matter, I refer to the national organization and its local chapters, why is the purple press not covering how the donations and the moral support of Wokies and newly minted corporate allies are being used to improve the lives of African-Americans?

The media only seems interested in reporting on (mostly peaceful) protests and the antics of Antifa. I know, I know, "if it bleeds, it leads" (if it burns, it earns? if it's shattered it matters?).

Journalists have to eat and pay rent too, but depicting how the money is being spent and how the moral support is being utilized should serve to generate more money and moral support, right?

Speaking of protests, now would seem to be an excellent time for the sort of stories mentioned above since apparently the No Justice No Peace Club, Portland Oregon chapter, is taking a breather.

Poor air quality, caused by wildfires, has put a damper on the activities of card-carrying members of the IUPPPP&PVTTOT and their fellow brothers/sisters/H. sapiens.

Interestingly, the current fires already are the subject of a Wikipedia entry, 2020 Oregon Wildfires. Some quotes of interest from the article:

"Through the end of July 2020, 90% of Oregon's wildfires had been caused by humans versus a yearly average of 70%, possibly because of increased outdoor recreation due to the COVID-19 pandemic."
"Senator Jeff Merkley, (D-OR) decried Donald Trump's comments blaming forest management for the fires as a 'devastating lie.' Speaking on This Week with George Stephanopoulos, Merkley blamed climate change for the fires."
Speaking of protests again, check out this video:
A handful of apparently confused but determined protestors blocked a bus full of reporters from leaving Disney Word thinking it was the Los Angeles Lakers team bus — which was already gone.
This contingent of Wokies was hoping that Lebron James and other Lakers who participated in a brief work(?) stoppage to support BLM would join them on the front lines, but they missed the bus.
This article from Yahoo! Sports explains the situation quickly and (relatively) cleanly (I'm so old I can remember reading articles not containing a single tweet). Unfortunately, even if they had stopped the right bus the players wouldn't be able to join them because that would bust the NBA bubble they're living in.
From the news that you can use but probably never heard of because our vaunted fourth estate mostly ignored it desk:  Phones used by the members of the Muller investigation into the Donald and his minions alleged collusion with the Pooteen "repeatedly and accidentally wiped phones assigned to them."
According to a mind-numbingly detailed report by Judicial Watch when the Special Counsel's Office (Fedrl Gummit lawyers) reviewed the phones for records-preservation purposes, it found 27 different phones were "reported wiped clean of all data prior to the review having taken place."
Clearly, Congress needs to investigate why it's so easy to accidentally erase all the data from a given cell phone. Is this true of all cell phones or just cell phones sold to The Fedrl Gummit?
Thanks Cali! I'm amazed that the serfs of the People's Republic of California don't throw impromptu torch-free pitchfork parties whenever the state catches on fire and their Gaia worshiping, forest management forbidding green overlords blame the fire on climate change.
Californians have been breathing carbon saturated air for the last month or so but lately, when the sun comes up in Flyoverland, it looks like a giant full moon because left coast smoke serves as an optical filter.
Thanks, guys/girls/others!
Poppa loves you,
Have an OK day
P.S. Check out this page that the CDC updates weekly. Of 182,095 plague deaths (so far), 143,790 victims were 65 or older and 38,305 were under 65.
Since 56,525 were 85 or older, and 363 were school-aged (5 - 24) out of a population of 327,167,434, why are the schools partially to completely shut down and why does the purple press keep telling us it's the end of the world?