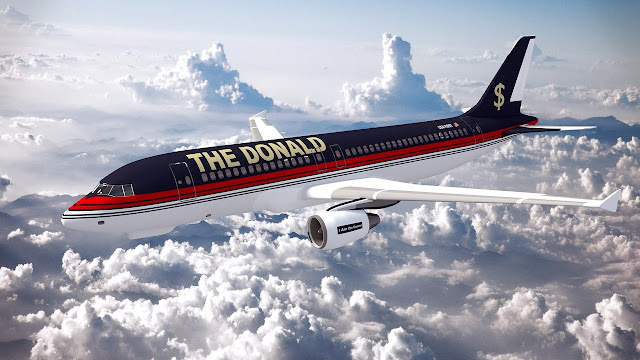 Erratically Appearing Hallucinatory Guest Star: Dana — A Gentlerreader
"Seventy is old enough. After that there is too much risk." -Mark Twain

Dear Grandstickies & Great-Grandstickies (& Gentlereaders),
Chris Wallace, anchor of Fox News Sunday, recently interviewed the Donald on FNS. I didn't watch the interview, nor do I plan to. I did read about it, however, and was pleased to learn that the fearless Mr. Wallace occasionally responded to one of Daffy Donald's, um, alternative facts by saying, "That's not true, sir."

[So you're writing a column about an interview that you didn't watch?]

I'm also proud to say that I didn't watch George Stephanopoulosese's in-depth interview of Mary L. Trump and don't plan to, but I read about that too.

Being a current events junkie I have seen an occasional video clip. When you frequent as many websites as I do it's impossible to avoid verifying that The Donald vs. the Purple Press show is still on the island trapped in the swamp.

Oh, and before I forget, if any of my younger gentlereaders, or alleged journalists, would like to discover what an actual journalist is, check out Chris Wallace.

Absabalutely. Well, let me qualify that a bit. No one was more shocked than the Donald when he got the Depublican nomination. He wasn't running for president he was just doing his job, hustling hoopleheads for fun and profit.

He was as surprised as the rest of us at how easy it was to kill all the paper tigers in the circus.

Once he secured the nomination though and found himself competing against a pair of fellow world-class hustlers, the Hilliam, he played to win. The Donald always plays to win.

[But you said he wasn't serious about wanting to be president.]

Yes, and I stand by that. But he views life as a zero-sum game in which there are the winners and there are the losers. Anyone paying attention knew that before Mary Trump excreted her version of just how bizarre the Donald and the Donald's daddy were/are.

She's a hustler, just like her uncle Donnie. I don't care much for hustlers but in her defense, from what I can tell she did actually write a book that I won't be reading. The Donald pays others to write books that I'll never read. Hopefully, she'll shortly fall off the radar and I won't have to not read her work or not watch her interviews ever again.

Now, I did read a couple of paragraphs of his most famous book, The Art of the Deal, while skimming through a copy that a former acquaintance had purchased when it first came out back in 1987.

In retrospect, I've come to realize that that was when I started going out of my way to avoid all things Trump. Prior to that, I had just been ignoring him. I had thought of him as just another egomaniac that would never have enough fame or money.

In his defense, he's not actually written a whole slew of books that I've never read. Ms. Trump has only written one book that I'll never read.

[Why are you calling her a hustler?]

Well, she's managed to sell over a million books and the only fresh sleaze she could come with about the Donald was that he paid someone to take his SATs, for which she readily admits she has no evidence whatsoever.

The Donald should've made her his apprentice back when she managed to get her hands on a larger chunk of her grandfather's money (the Donald's daddy) than he had left her in his will. How did the Donald miss such obvious potential?

On a related note: I just went to Amazon.com, selected "books," and typed in too much is never enough by mary trump. Amazon provided me with 15 hits, none of which linked to the actual book in question. Some were completely unrelated, others linked to books about the book.

If I didn't know better I'd think that the Bezoid (that's the name of Amazon's lead Alogrithmite) was pulling some crap. But recently Jeff Bezos and the other usual suspects assured Congress that they don't do that sort of thing.

[If that's true you should provide a link to your alleged search results.]

Wouldn't work. The Bezoid would access any given clickers file(s) and provide them with customized results designed to sell them something.

[You were serious, you really did write an entire column about avoiding the Donald! What's your point?]

My point is that the political version of you get what you pay for is that you get who you vote for.

My point is that most of my fellow Citizens of the Republic are still hard-working, generous people who have better things to do than follow politics closely. God bless (help) us, every-one.

My point is that if everything keeps turning to shyte and my grandstickies should find themselves reading this someday trying to ascertain what happened and why they're still paying for it (literally and figuratively) this might help.

Although I'm not crazy about social media (too cranky) please feel free to comment/like/follow/cancel/troll me on my Facebook page.