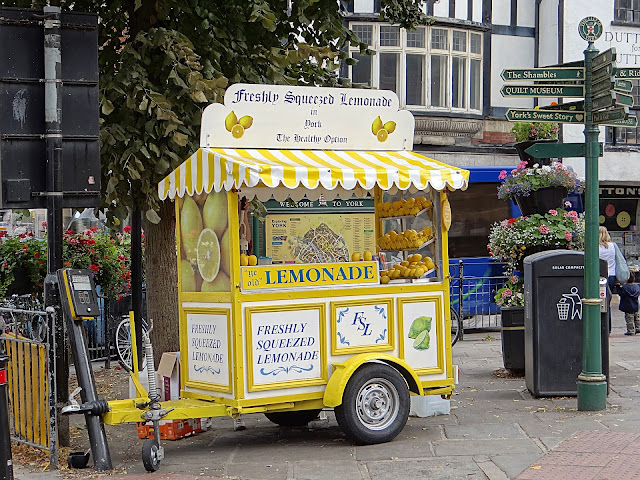 
-Image by Jessica Crawford from Pixabay-

"I believe that starting any business should be as easy as a 10-year-old starting a lemonade stand." -Mark Cuban

When I was a kid, normal, if you could marshall the resources and secure mum's permission, was setting up a Kool-Aid stand and investing the profits, if any, locally. That is to say, by purchasing baseball cards and comic books.

Yes, Dana. Drinking or giving away more Kool-Aid than you sold was not unusual.

Until this year, the new normal — once it warmed up to the point that kids started setting up black-market, locally sourced organic lemonade stands to raise money for St. Jude Children's Research Hospital or the like — was news stories decrying The Man showing up and shutting 'em down.

I predict there will less of the new millennial version of this rite of summer this year given that nowadays when we look over our shoulders to see if someone's following us we're as concerned about whether or not they're maintaining a safe following distance as much as we are about being raped, robbed, or murdered.

Oh, before I forget, a public service announcement. If you, like me, still use snail mail from time to time and find return address labels useful you can ensure a lifetime supply of free ones by donating to St. Jude Children's Research Hospital occasionally.

They do much good and work many wonders. By sending them a few bucks whenever the goddess Philanthropia nudges you, seasonally themed labels will continue to appear in your mailbox for the rest of your life, perhaps beyond. Win/win.


A hot day. A quiet street in a relatively new, treeless (with the exception of the occasional sapling) suburban "development."

On a choice corner lot two siblings, Ludwig and Cornflower, are standing behind a large, plastic, Little Tykes "Old Fashioned Lemonade Stand." Both are wearing N-95 face masks and are staring, slack-jawed, at their smartphones. They are scrolling through their favorite social media sites while listening to different songs via earbuds.

There are no customers as all the other neighborhood kids are inside their comfortable, climate-controlled homes staring, slack-jawed, at their smartphones. They are scrolling through their favorite social media sites while listening to music only they can hear while simultaneously basking in the warm glow of 60" televisions.

Some parents, the laid-off ones that work in meatspace, are also sitting there and doing the same thing. Family time.

Other parents are working remotely in home offices, real or virtual. There are tax deductions available if you follow the rules (or don't get caught).


Back outside, a caravan consisting of an SUV (with police car package)...

Followed by a white, Sprinter style van that says _______ County Health Dept. on both doors...

Followed by an SUV that looks exactly like every other SUV in the world (except for paint color and trim package)...

Followed by another SUV (with the new and improved police car package)...

Pulls up and stops in the middle of Oakview Drive so as to block access to the scene of the crime till the situation can be resolved to the satisfaction of the Health Commissioner, the Police Chief, and the Law Director.

Cornflower texts her mom, who's in the bathroom washing down a Xanax from a flask of Vodka that she keeps hidden there. Not sure what's going on she launches an emergency text that brings members of the neighborhood watch and/or homeowners association running to the scene.

In short order, everyone is yelling at and recording videos of each other — while standing six feet apart. Most of the people in the crowd are wearing face masks of some sort and giving the stink eye to those few that aren't.

Several trendy teenagers, members of the Oakview Posse, who are wearing matching yellow bandanas and yellow Playtex gloves are standing off to one side taking selfies and posting them on their favorite social media sites.


Two hours later, the situation has been resolved. The cops are loading the confiscated lemonade stand into the back of the health department van; the crowd has thinned out; mom is in the middle of an intense, three-way call with her estranged husband and a lawyer.

Suddenly, from opposite directions, two large vans bristling with rooftop dishes, antennas, and other technical-looking stuff converge on the scene and a helmet haired, overly made-up, immaculately dressed reporter from two rival local TV stations jumps out of each van holding a microphone, each followed by a scruffy looking cameraperson.

Ludwig, alerted by his phone that it's time to take his meds, looks up in surprise and says to no one in particular, "Wow, like, what's goin' on man?"