Where Were You When the Lights Went Out?

If you're new here, this is a weekly column consisting of letters written to my grandchildren (who exist) and my great-grandchildren (who aren't here yet) -- the Stickies -- to haunt them after they become grups and/or I'm dead.

[Blogaramians: Blogarama renders the links in my columns useless. Please click on View original to solve the problem/access lotsa columns.]

Being a current events junkie is one of the reasons I spend (relatively speaking) a lot of time online.

[I use the phrase relatively speaking because I suspect, no, I know, that compared to the average smartphone addict (I still don't own a smartphone but I'm still sure it's inevitable) I'm strictly bush league. I still regularly read all sorts of things in dead trees format. I read entire ebooks while offline.]

When I go a-clickin' 'round the internet...

[Are there internet folk songs? A-clickin' 'round the internet, a-clickin' I do go!]

...I save all sorts of things for later viewing that may be something I would want to write about. I'm currently deleting my butt off in an attempt to keep my myriad saved sites under at least minimal control and I chanced upon the Earth Hour site.

In case you didn't know, Earth Hour is a movement, a website, and a nonprofit organization.

[Speaking of nonprofits, I'm constantly stumbling upon articles and videos of one sort or another about Millennials joining/starting nonprofit organizations. This is why I don't worry about where are all the jobs are going to come from in an increasingly automated world. Everyone can work for a nonprofit and sell merchandise/solicit donations from each other for a living while saving the world. Cool, huh?]

Earth Hour ("...together, let's #ChangeClimateChange"), in case you were unaware, promotes climate change awareness by encouraging the citizens of planet Earth to all turn off the lights, simultaneously, for an hour, once a year. It's a project of the World Wildlife Fund for Nature, which according to Wikipedia, is the world's largest conservation organization.

Now, I can almost hear my more cynical readers snorting in derision.

[Snorting? I'm sure there must be a better word for that varying noise H. sapiens emit when saying something like, "yeah (aforementioned noise), right" but I can't think of one.]

And, in this particular case, adding something about how much more made aware can we be about climate change. Perhaps even tossing in something about limousine liberals and their ilk saving the world by flicking a light switch once a year.

Not I. We must be ever vigilant, for snark and cynicism, like rust, never sleeps. While I'm somewhat skeptical about climate change and who/what is causing it (assuming it's an actual thing), I'm skeptical about everything, Particularly about planet-wide, big picture shtuff that requires complex, elaborate computer modeling. Particularly when various models predict various outcomes. Particularly since models are built by H. sapiens.

And, since I followed the global cooling predictions reported on by the likes of Time and Newsweek in the early 70s. Nowadays, this historical phenomenon is shrugged off by modern scientists who say that it was primarily the fault of a mistaken news media, not mistaken scientists. All the more reason to skeptical of everything, especially the news media.

[By the way, I can't recommend an attitude of general skepticism enough. In fact, I highly recommend an attitude that regards all knowledge as provisional and subject to radical revision, often when you're least expecting it. However, you don't have to be a jagoff (definition No. 2) about it. It can be done with a little style, like anything else.]


So anyway, I'd forgotten about Earth Hour altogether. It's not a hot topic here in Flyoverland. We've been somewhat sidetracked for the last several decades by our dismal economy, rusting empty factories, shrinking middle class  -- that sort of thing. Now we're dealing with an opioid epidemic that isn't just about addiction -- people are dropping dead with disturbing regularity in spite of the hundreds of billions we've spent/spend on Prohibition 2. A lot of people aren't just saying no.

[On the bright side, Prohibition 2 creates lots of good gummit and, The Gummit, jobs. Also, civil asset forfeiture helps to fund many local police departments, although some spoilsports keep whining about the constitution.]

However, as I mentioned above, while trying to get my eclectic collection of seemingly several million saved sites from which I could conceivably craft an eventual column of some sort, there it was, Earth Hour.

Or rather, a column by Mark Perry (an economist that lives in the real world and one of my intellectual heroes) about Earth Hour. "Instead of Barbaric Darkness, Why Not Celebrate Human Progress?  It's a brief, well-written piece well worth reading but I know how busy you are, so I'll summarize it for you.

Mr. Perry (and I) thinks that the widespread use of electricity (regardless of how it's generated), rocks. Most of his article is actually a lengthy quote by another economist, Ross McKitrick. The first three sentences of the quote say it all.

He then lists several of those social advances and also points out that, "Many of the worlds poor suffer brutal environmental conditions in their own homes because of the necessity of cooking over indoor fires that burn twigs and dung."

Below is a satellite picture, courtesy of Google images, of North Korea at night. Apparently, King Kim the third, the chubby-cheeked commander in chief of the Norks is a rabid environmentalist. The Norks celebrate Earth Hour 24x7x365. You can almost smell the twigs and dung burning.

And you thought he was only famous for murdering various family members, starving his own people, and of course attempting, via The Bomb, to establish the ultimate protection racket.

"Nice country you have here, it'd be a shame if someone rendered it a wasteland. Know what I mean? 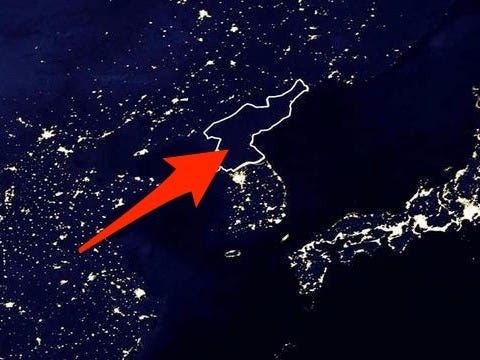 [Confession: Mr. Perry's article also includes a (different) image of North Korea at night so technically you could make a case that I stole his idea. In my defense, I've been aware of the Norks environmental devotion and similar images, literally, for decades and this column just gave me an excuse a chance to publish what is a well-known image/phenomenon that everyone should be aware of.]


[At this point in my writing I hit a wall, well, not much of a wall, but still... I just couldn't come up with a last paragraph or two that I was happy with so I placed the column in a virtual drawer and tried not to think about it.

I decided to not take it out till just now, Saturday morning, though I plan on publishing it tonight at 11:07 p.m. I figured that even if I couldn't come up with something I really liked the time pressure would force me to come with something that was good enough. And then the week happened...]

And we're back. Speaking of goofy, pointless, feel-good gestures to pub-lic-ally proclaim one's green bona fides, the Donald took it upon himself to pull the USA out of a globe spanning example, the Paris Climate Accords.

Also, comedienne, Kathy Griffin, made a joke that fell flat.

These events enable me to end this column/letter here and ask you to tune in next time whereupon I will discuss these two events and what they have to do with purposeful polarization, dizzinformation, the state of the zeitgeist, the constitution, and all sorts of shtuff that I tend to prattle on about. Poppa loves you.

Have an OK day.


[P.S. Gentlereaders, for 25¢ a week, no, seriously, for 25¢ a week you can become a Patron of this weekly column and help to prevent an old crank from running the streets at night in search of cheap thrills and ill-gotten gains.

If there are some readers out there that think my shtuff is worth a buck or three a month, color me honored, and grateful. Regardless, if you like it, could you please share it? There are buttons at the end of every column.]

If you're reading this on my website (where there are tons of older columns, a glossary, and other goodies) and if you wish to react (way cooler than liking) -- please scroll down.