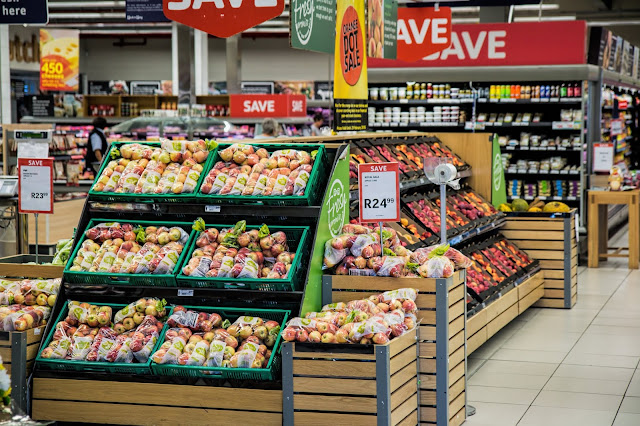 ... at my local full service -- expensive except for the stuff on sale that you have to pay full price for if you don't have a key tag or a card to prove you willingly signed up for them to keep track of what you buy and sell the information to whomever they please -- supermarket.

If you're new here, this is a weekly column consisting of letters written to my grandchildren (who exist) and my great-grandchildren (who aren't here yet) -- the Stickies -- to haunt them after they become grups and/or I'm dead.

I've decided to cover the last of the cardinal virtues, courage, next week. What follows is an Andy Rooney like semi-rant that flowed out of me in virtually one sitting. By the time you're grups, this will probably seem like ancient history as grocery shopping for you will consist of dictating a grocery list to Alexa's granddaughter and waiting for the grocery drone to arrive minutes later.

I had returned to the scene of the crime for the second day in a row, in spite of my dislike of shopping of almost any sort, because my first visit had proven to be disappointing. I was feeling productive because I had already been to Walgreens to pick up a scrip to treat my leprosy (you don't want to know) and had marshaled enough self-discipline to also visit Dollar General for assorted sundries.

My beloved Arizona Green Tea with Ginseng (decaffeinated) was on sale. My equally beloved Schwebel's Country Potato bread was on sale as well. I consider both products to be vital staples.

While my shopping buzz was still buzzing I continued my quest, perhaps I could execute a three-peat.


Background: The day before I had decided to walk on the wild side and purchase double my normal weekly supply of each product and get four loaves of bread as well as four jugs of tea. However, I was only able to secure two loaves of bread after deciding to pass on the only other loaf available which was gently (but who knows by what or by whom?) squashed.

Noting that the Schwebel's section of the bread aisle had a disheveled, picked-over look, I deduced that the bread man had not yet stopped by for his daily visit. For the record, the preceding sentence is not sexist in nature.

I worked in supermarkets for ten years and have been shopping in them for more decades than I would care to admit. I have never encountered a bread woman and if you are, or know of one, please accept my insincere apology. Since the job consists of driving a huge step-van here, there and clear over there, no matter the weather, and dragging huge racks of bread in and out of all sorts of stores, many run by very unpleasant people, I just assume women are too smart to subject themselves to this sort of daily grind.

And now that I think about it, I've never encountered a woman who drove a linen service truck for a living either. However, I confess I don't know much about that particular business and I've never worked in a commercial laundry (though I have spent a lot of time in laundromats) so I won't bring it up.

So anyway, I did my other shopping, which went well except for the fact that there were only two jugs of Arizona Green Tea with Ginseng (decaffeinated) left on the shelf. When I had crossed everything off my list I found myself at the opposite end of the store from where I started, where the restrooms are? Being a man of a certain age, I popped in for a preventative, um, rest.

When I came back out (No Shopping Carts Beyond This Point, Alarm Will Sound!) I walked all the way back to the other side of the store to see if the bread person had stopped by, no luck. I mention this only to demonstrate my devotion to my beloved Schwebel's Country Potato bread, which I can't recommend enough.

I headed for the checkout counters and took care of business. This part of the trip went well except for the fact that as I passed the service desk on my way out of the store, I realized that I had left a winning four dollar scratch-off ticket in Betty's console, yet again. Betty is my minivans name, by the way, short for Betty Boop.


So today, feeling both (uncharacteristically) optimistic and productive, I again ventured into my local full-service (see paragraph one) supermarket. I arrogantly waltzed by both the hot prepared foods and bakery department with nary a glance. I'm no newbie -- while they both look and smell awesome, the actual taste of the pretty and perfectly presented goodies, in most cases, is a bit of a letdown.

I entered the bread aisle and my heart leaped, the Schwebel's section was stocked to the max! With a spring in my step (well, sorta, I had a hip replaced three months ago) I strode down the aisle only to discover a yawning, empty gap where the Country Potato Bread should be. My spirits began to plummet but then I remembered it was Wednesday, perhaps there was hope after all.

[Just in case you're unaware, bread people, like doctors, don't work on Wednesday because they (unlike most doctors) have to work on Saturdays which is why so many of them belong to the teamsters union.]

See, bread delivery technicians usually over-deliver bread on Tuesdays and Saturdays to tide a given outlet over till Thursday/Monday.

Anyways, the store's bakery was just a few steps away, the one that sells all the pretty products that rarely taste as good as they look? And there was a clerk behind the counter who didn't suddenly pretend to be busy as I approached to avoid making eye contact.

I inquired if she knew if there was any extra Schwebel's Country Potato bread "in the back" as it was on sale but there was none on the shelf. She looked baffled but she spotted her supervisor and asked her if there was any Schwebel's Country Potato bread in the back. This woman; likely overworked, underpaid, under-appreciated by her boss, spouse, and kids -- who looked like her feet hurt -- said, "Lemmylook," and exited, stage left.

She returned in a flash with a single loaf of bread, brightly wrapped in colorful cellophane, handed it to the clerk and re-exited stage left in the same motion. The clerk approached me with a big, bright smile and proudly handed me a loaf of Giant Eagle Homestyle Potato bread. A product whose everyday price is cheaper than the price of my beloved Schwebel's Country Potato bread is when its on sale -- and tastes like it.

Resisting the urge to squash the loaf in question via an armpit or tossing it in a freezer as dark clouds begin to gather over my soul I gently placed the offending loaf on the shelf in the empty space where the Arizona Green Tea with Ginseng (decaffeinated) was supposed to be but wasn't.

As I approached the service desk on my way out of the store and as I was reaching for the winning (four dollars) scratch-off ticket that I had remembered to bring with me this time I saw them.

Near the door, a very young, very attractive, very worried-looking, very heteronormative looking young couple was feeding coins into the Coinstar machine. She was so pretty (and wearing an actual dress!) that I was instantly drowned by a tsunami of _______.*

[*_______: non-existent word denoting a heart-achy/nostalgic/bittersweet/I'm gonna die/I own socks older than she is sort of feeling.]

Without breaking stride, I pulled the lottery ticket from my t-shirt pocket with my left hand while simultaneously reaching into my right pants pocket and scooping up the change that I knew I would find there and pivoted in their direction.

When I was close enough I announced my presence with an, "excuse me," tossed my coins into the sorting tray, handed him the lottery ticket and said, "every little bit helps" and darted (well sort of, the hip thing) towards the exit door. I glanced over my shoulder as I was going through the door and she blessed me with a brief, cautious, black cloud banishing smile before quickly turning away. Poppa loves you.

Have an OK day.


[P.S. Gentlereaders, for 25¢ a week, no, seriously, for 25¢ a week you can become a Patron of this weekly column and help to prevent an old crank from running the streets at night in search of cheap thrills and ill-gotten gains.

If there are some readers out there that think my shtuff is worth a buck or three a month, color me honored, and grateful. Regardless, if you like it, could you please share it? There are buttons at the end of every column.]

If you're reading this on my website (where there are tons of older columns, a glossary, and other goodies) and if you wish to react (way cooler than liking) -- please scroll down.

Mark Mehlmauer
Flyoverland, United States
This is the web site of an old fart from Flyoverland (fly-OVER-lund). Me and mine live in a highly fortified lair in the mountains of Ohio. Flyoverland is a ginormous chunk of territory consisting mainly of farms and fracking wells. It's what the cool kids from DC, NYC or Siliconia see if they look out the window. My goals are to entertain, poke the bear, and perhaps find a way to make some money via my feeble scribbles. Thanks, and God bless (help) us, every-one. I can be bought. If you're an adoring fan or If you're interested in publishing or syndicating me before I become famous (and the price goes up dramatically) you can contact me at: theflyoverlandcrank@gmail.com.